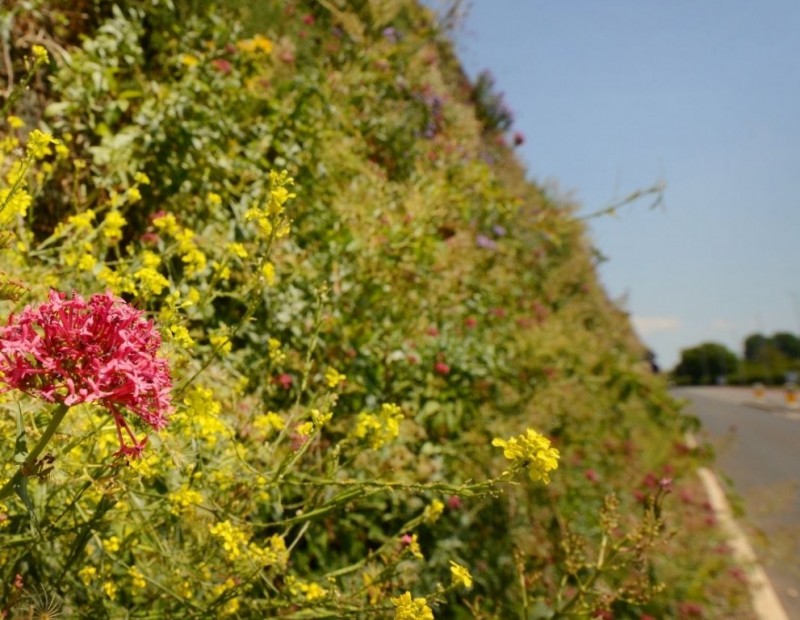 Sherford landscapers, YGS Landscapes, has won a British Association of Landscaping Industries (BALI) Award for the Living Wall in Sherford.

Locals to Sherford and Plymouth will be familiar with the towering green expanse that welcomes you to the new town. This living wall has been nationally recognised, winning the category of ‘Living Wall Installation (Exterior)’ in the BALI National Landscape Awards.

The wall was created as part of Sherford’s commitment to sustainability and contributes to the green infrastructure of the city, encouraging greater biodiversity for Plymouth. Measuring 10m high, this green wall is one of the biggest in Europe.

The National Landscape Awards will physically celebrate 79 award-winning landscaping schemes across the country on their Awards Night in London in December. YGS Landscapes were one of the 17 winners who were first time entrants to the awards.

“We are thrilled that the Sherford wall project has been recognised nationally; it’s been a difficult, but exciting challenge. It has established really well over the last 12 months and it’s a great testament to our landscaping and maintenance teams’ dedication and hard work. It’s also a wonderful landmark, befitting such an exciting new development and our clients are delighted with the way it’s matured.”

“YGS landscapes were fantastic from start to finish. They grasped the challenge, overcame numerous hurdles and delivered the project ahead of schedule. Steve and his team really did help the Sherford Consortium throughout the process with their enthusiasm, knowledge and professionalism and I’m sure all involved with Sherford appreciate and enjoy the result of their efforts daily. They should be very proud of this achievement and indeed, acknowledgement of their works. “

“The mix and quality of this year’s submissions was extremely encouraging. The complex and diverse nature of the entries continues to showcase the capabilities of the industry and its skilled workforce, with the continued desire to demonstrate a quest for perfection.

“The kudos of receiving a National Landscape Award still resonates throughout the industry with entrants continuing to hold the site inspections in high regard.”

The green wall was planted with 26,000 plants on a south facing structure. It took over 1000 hours to complete. It has since attracted huge attention and is synonymous with Sherford’s entrance road.

Becoming something of a landmark, it has also attracted interest from the local University who are monitoring and studying the biodiversity within this structure. YGS are looking forward to managing the structure moving forward and introducing further species to add to the scheme's fantastic biodiversity.

YGS is proud that this work has been nationally recognised and hope that the residents of the town and indeed city will enjoy the planting for years to come.