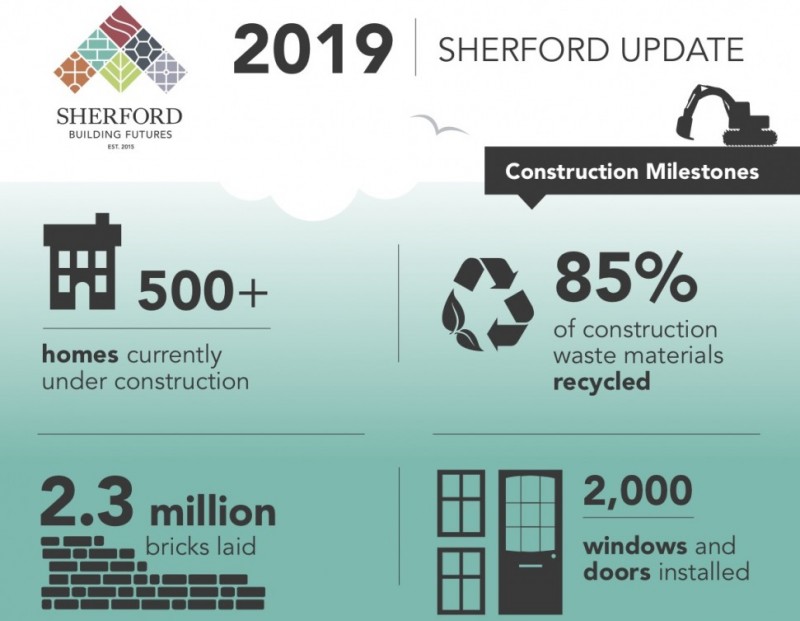 New figures have revealed the monumental progress being made in the construction of Sherford, one of the South West’s largest new community developments. Since house construction began in 2016, in excess of 150 residents live in the vibrant and growing community, and the first primary school is bustling with over 90 pupils.

Emma Colin, Sherford Consortium – the partnership of homebuilders responsible for the new community, Bovis Homes, Linden Homes and Taylor Wimpey – said: “A tremendous amount of work, investment and manpower has gone into bringing the vision of Sherford to life. It is hugely rewarding to see how Sherford is evolving into such an incredible community. So much has been achieved already, despite only being in its first phase of development. With many more milestones in the pipeline in the next year alone, we look forward to this community going from strength to strength.”

Devon County Council Leader John Hart said: "An impressive amount of work is going into the development of the new community of Sherford and it really is progressing well. Aside from the development of homes and infrastructure, we've also seen the opening of some vital community facilities such as the primary school, the skills training centre and the first part of the country park, and the main road linking Sherford to Deep Lane Junction is also currently being built."

Cllr Dan Brown, Ward Member for Wembury and Brixton said: “I simply want to say wow.? Every time I drive into Sherford I am amazed at the progress.? New homes are being occupied all the time and the community is really starting to grow.? It is such an honour to be part of the birth of this fledgling community and I am really looking forward to celebrating future milestones with the residents.”

Since house construction started in 2016, more than 2.3 million bricks have been used at Sherford, 2,000 doors and windows have been installed, along with over 1,000 tonnes of cement used. Forming the foundations of the new community, bricks and concrete have been used to create homes, buildings, roads and pavements throughout the town.

A huge amount of effort has also been made in creating new wildlife habitats, including designing and constructing over 5 miles of wildlife corridors. Forming a network of green spaces across the site, these corridors are already being used by local deers and rabbits, ensuring they can navigate throughout the community safely.

The first primary school, Sherford Vale, opened its doors to pupils in September 2018. It now has over 90 pupils in four classes, along with over 20 nursery age children in a dedicated unit. It is the first of four schools in Sherford and will eventually have an intake of 420 pupils.

Already a thriving new community, with over 150 people relocating to the town, more people are moving in on a near weekly basis.

The first part of Sherford’s 500-acre Country Park opened to the public in the summer of 2018. A footpath was recently created for residents to walk to the park from their homes. Work is also well underway in creating and expanding the next segment of the park, with extensive woodland planting taking place.

23 new roads have been created to date, along with 22 new residential streets. £8 million has been invested in the creation of Main Street, to connect Sherford to the A38. Work has already begun on the major new route and is due to be completed by Spring 2020.

A massive 255,000 plants, trees and shrubs have been planted, along with in excess of 3,000m2 of wildflower seeds sown. The community’s first grass play area is set to open ahead of the school summer holidays next month. Work has also begun to create the town’s first sports pitches, allotments and tennis courts.

Many people and businesses are playing a key role in bringing the vision of Sherford to life, with an average of over 250 workers active on site every day, as well as 15-25 machines active. Sherford is supporting the local economy, with 60 contractors involved in the town’s construction, the majority of which are local.

Sherford’s impressive main entrance features over 30,000 plants, including climbing daisies, ivies, gorse and ferns transplanted from the existing site, and will also eventually be the perfect home for birds looking to nest.

Since the opening of Sherford’s £370,000 Skills Training Centre, which aims to boost manual skills by providing training across several construction trades, more than 200 people – including apprentice, veterans and contractors – have engaged with the centre.

Despite only being in the first phase of its construction, Sherford’s credentials have already been recognised, with the development shortlisted in three industry awards. Demonstrating a commitment to creating a sustainable community, Sherford scooped an award from sustainability assessment scheme, CEEQUAL in 2018, as well as being recognised as one of the most exceptional developments in the region with a nomination in the prestigious 2019 Michelmores Property Awards.