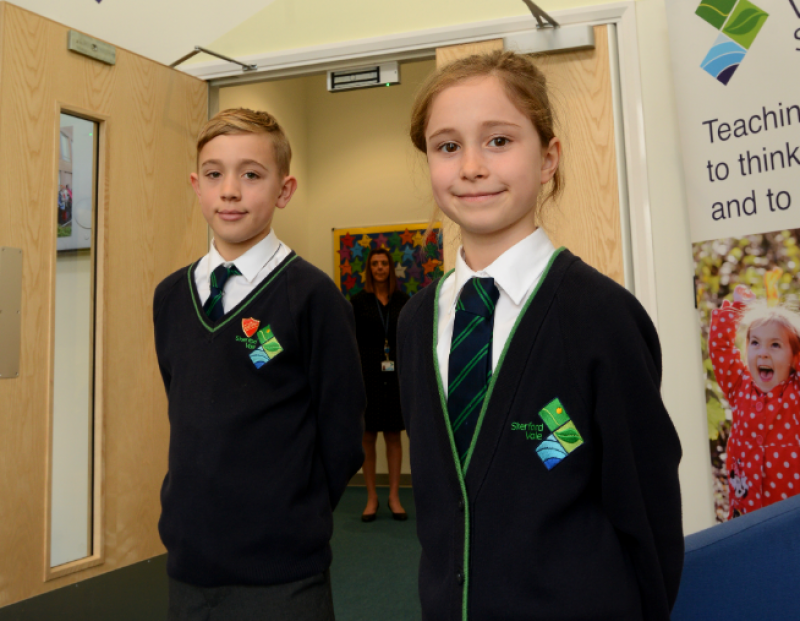 The new school represents a £6m investment into community infrastructure and has been funded by the Sherford Consortium – the partnership of award-winning homebuilders, Bovis Homes, Linden Homes and Taylor Wimpey – with £1m also pledged towards its creation by Devon County Council.

Marking a major milestone in the development of the new community, Sherford Vale opened its doors for the first time in September. The pupils, aged between 2-11 years old, are the first of 420 children set to attend the new school, which is sponsored and run by the Westcountry Schools Trust (WeST), which has a proven track record in education excellence locally.

As well as being one of the first major events for the new school, the official launch was also an opportunity for local dignitaries to tour the completed building and meet teaching staff and parents. Guests were shown around by school ambassadors and treated to a performance from pupils, reflecting the schools values; Think, Create, Ask, Succeed. Pupils had also created a short film for the occasion, which shared their hopes for the future, as well as performing a song about building a new community.

The children joined Sir Gary Streeter MP, Sherford Consortium and guests to bury a time capsule in the school grounds. Set to be dug up in 2038, once the construction of Sherford is complete, the time capsule contained an ancient piece of pottery unearthed by archaeological teams at Sherford, as well as letters and drawings by the children, outlining their hopes and visions for the future of Sherford.

Malcom Gilmore, Sherford Consortium said: “It is fantastic to celebrate the official opening of Sherford Vale alongside those who helped turned the school’s vision into a reality, as well as welcoming Mark Ormrod to unveil the plaque and tour the new facilities.

“After years of planning, Sherford Vale’s official opening is a landmark moment in the history of the development, demonstrating how much work and investment is taking place to support the growth of this new community. There will be plenty more milestones to celebrate as Sherford continues to progress in 2019 and beyond.”

Devon County Council leader, John Hart, said: “It’s absolutely vital when we are trying to create new communities that people putting down roots there know that they will have the facilities they need to go with their new homes. I was pleased that Devon County Council was able to contribute £1 million towards ensuring the new school was up and running as people moved into Sherford. Not only will it provide an excellent education for the children, but I hope it will become a real focal point for everyone living there.”

Helen Tipping, Headteacher, Sherford Vale School said: “Since opening, Sherford Vale School has quickly become established at the heart of the community – and a place which the children, staff and families are proud to call ‘our school’. The first few months have been amazing, and alongside an enriching curriculum, new friendships are being made every day.

“It has been an absolute joy to be at the start of the school’s journey and alongside enthusiastic children, it’s fantastic to be part of a community which delights in getting involved. The Open Day was a great opportunity to step back and appreciate how much has been achieved in such a short period of time, and we look forward to the many opportunities ahead.”

Cllr Michael Hicks, Lead Member for Sherford at South Hams District Council said: “What a spectacular day!  In these early days of the new town I can see this new school becoming the heart of this community.  What a lovely environment for the young children who come here.  I am so delighted to have been part of a local authority who has been able to make this possible.  The opening day for the school has been a very good day for the future of South Hams.”