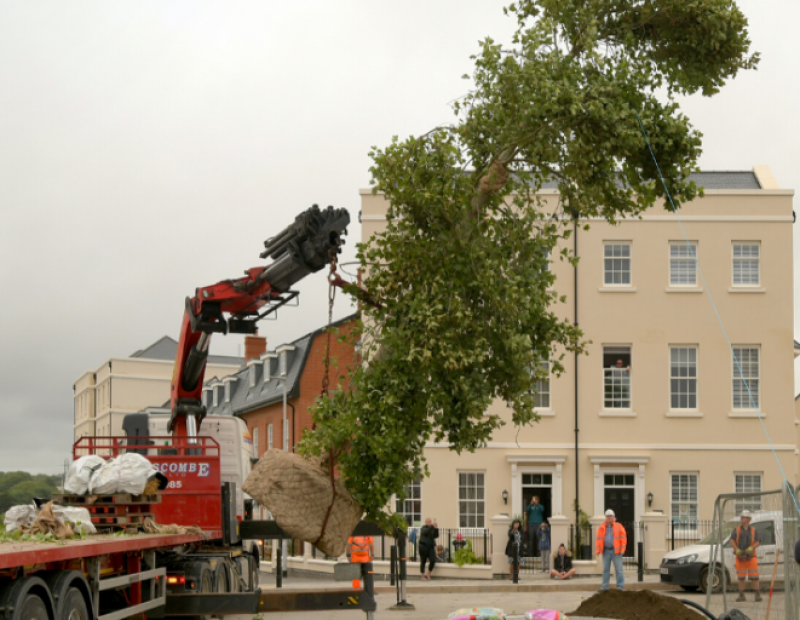 A towering Tulip tree has been planted at Sherford to celebrate the Mayflower 400 anniversary. The impressive 9-metre tall tree is native to Massachusetts and was specifically chosen by the Sherford Consortium to honour the historic connection between Plymouth and its American namesake during the Mayflower commemorations.

In a small socially-distant ceremony, the tree was planted by Charles Hackett, Chief Executive Officer of Mayflower 400 and representatives from the Sherford Consortium. Delivered by crane, the tree weighs around 3-tonnes and took several hours to be settled into position on Libra Avenue, amidst Sherford’s homes.

This is believed to be the largest of its kind planted in the South West and could reach up to 12-metres tall, with a canopy spreading out over 8-metres once fully grown. Tulip trees are one of the tallest native trees of eastern North America, hailing from the state known for the Mayflower’s pioneering voyage. Currently, it measures 80cm around its trunk and arrived at Sherford in a 2-metre wide pot!

For circa 35 years it has been in the care of British tree-grower, Hillier Trees, located within their 750-acre tree production site in Petersfield. The tree came to UK in 1985 as a 60-80cm tall seedling and has been transplanted seven times to give it a full and healthy root system. Grown in British soil for 35 years, the Tulip tree has now found its forever home at Sherford, with help from Plympton-based YGS Landscapes, which oversees Sherford’s abundant landscaping.

Although the current restrictions prevented Sherford’s residents joining the celebrations, they will soon have plenty to see, with the tree already in bloom with striking tulip-shaped flowers that will be on display through the summer months. It is hoped that later in the year pupils at Sherford Vale will be able to help welcome the tree to the town and place a commemorative plaque at its base.

Emma Colin from the Sherford Consortium and Regional Sales & Marketing Director for Vistry Partnerships said, “The tree stands proudly at the heart of Sherford, where it will continue to grow and flourish for years to come. This is a unique and special way to honour the Mayflower 400 anniversary and we chose the tree for all that is symbolises. The Tulip tree is a beautiful addition to Sherford and one we are sure the community will treasure.”

Charles Hackett, Chief Executive Officer of Mayflower 400, said: “Marking the Mayflower 400 commemorative year with the planting of a variety of Tulip tree that is native to Massachusetts is a symbolic way of highlighting the transatlantic connections that have been formed and evolved between the four nations since the Mayflower’s historic voyage in 1620.”

Steve Warren-Brown, Managing Director of YGS Landscapes, said: “The arrival of this epic tree has been in planning for over a year and we are delighted to welcome it as the latest addition to the Sherford landscape. It is a real testament to the Sherford Consortium’s commitment to enhance the environment wherever possible and make this a special place to live. This beautiful tree is a great celebration of the Mayflower commemorations, which we are thrilled to support.”